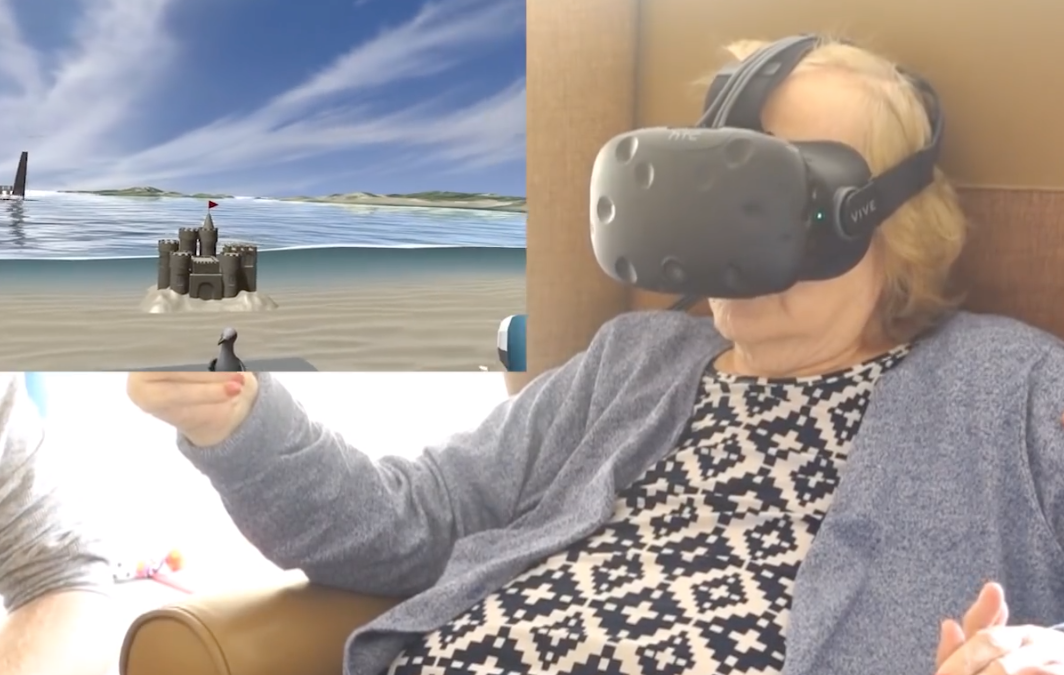 Virtual Reality and health care make sense as you can look at the world from a patient’s perspective. Especially when the patients can’t communicate (anymore) VR offers a great way to learn about what goes on in someone’s mind, when visiting certain places. Or look at the world with dementia, autism or anxiety filter.

As the group of elderly our growing also people with dementia will rise. Here’s a selection of interesting VR initiatives about this subject.

A new virtual reality device has been launched that will help architects and designers create dementia-friendly buildings and spaces by understanding how dementia can affect a person’s vision.

The invention is a market first for architectural design and will be known as Virtual Reality Empathy Platform (VR-EP).

It can be used in the design of new buildings such as care homes, hospitals or sheltered housing, and also has the potential to assess existing buildings and environments. Dementia-friendly design can significantly improve the quality of life for people living with the condition. Read more at website Scottish Construction Now.

A new virtual reality device that will help architects and designers create dementia-friendly buildings and spaces by understanding how dementia can affect a person’s vision has been launched. The invention is a market first for architectural design and will be known as Virtual Reality Empathy Platform (VR-EP).

It can be used in the design of new buildings such as care homes, hospitals or sheltered housing, and also has the potential to assess existing buildings and environments. Dementia-friendly design can significantly improve the quality of life for people living with the condition. There are currently more than 800,000 people in the UK living with dementia, a figure that is expected to rise to 1.7 million by 2051. Dementia costs the UK economy £26.3 billion per year – more than cancer and heart disease combined.

This application can help healthcare providers save expensive adaptive costs by designing buildings and spaces with the person living with dementia in mind. Read more at website VR-EP.

Aged care facilities have embraced the technology of the future, and residents suffering dementia could soon be given a virtual tour through their pasts with the aim of memory recovery.

Australian-designed virtual reality unit Solis-VR is already being trialled in more than 50 aged care homes, and while the images aren’t yet customised, the scenes residents are experiencing – sitting on beaches, traveling to polar ice caps and through scenic wilderness – have produced positive emotions, calming effects and a general improved quality of life for patients.

The clinical benefits have yet to be established, but the makers of the technology are encouraged by the overwhelmingly positive response they’ve received, and say it’s just the beginning for virtual reality therapy for dementia sufferers.

The next step is a fully customised experience, by placing a person back into the house they grew up in, or placing them inside other childhood or lifetime memories. “One of the things we realised with my father was that it was all about loss, the loss of his home, the loss of his car, the loss of activity, and the loss of interactivity with other people,” BuildVR, the maker of Solis-VR, co-founder Sally Darling said. Read more at website tenplay.com.au.

The EDuVR(Empathy for Dementia using Virtual Reality), developed by Jeju Provincial Dementia Center and launched in May 2016, is a 3D video capturing the experience of dementia in first-person perspective using recent 360-degree VR technology. The EDuVR was developed with the aim of creating a greater understanding of dementia and helping people empathizing with individuals with dementia through an immersive VR experience. By wearing a head-mounted display at any time, and anywhere, it allows you to look around, to feel like you are present in the video, and to gain awareness of the impact of dementia on everyday life. The EDuVR will be used for educating dementia caregivers and the general public.

A Walk Through Dementia is a unique Android-exclusive Google Cardboard app designed to put you in the shoes of someone living with dementia. See one of the 360 clips from the experience.

Hertfordshire based organisations, Tribemix and Quantum Care, have developed a series of virtual reality experiences that take people living with dementia in care out of the residential homes and away to a range of relaxing places. The immersive 3D scenes include the beach, a forest or even to watch dolphins playing around a coral reef.

The project has already gained industry recognition as Tribemix and Quantum Care have been nominated for an Outstanding Innovation Award in Dementia Care at the National Dementia Care Awards.

The project began when Tribemix Managing Director, Alex Smale, wanted to help his elderly neighbours to get outside after becoming isolated due to disability, “Our nearby residents, Stan and Dulcie, are 99 and 94 years old respectively. Over the past two years, we watched them go from active people walking into town to do their shopping, to losing their confidence and never leaving the house. When we began developing in VR for our commercial clients early this year, I thought ‘Wouldn’t it be great if we could take Stan and Dulcie to the beach?’. So I created a virtual reality experience to do just that. This led to a conversation with a friend at Quantum Care. They were fortunately very forward thinking, and understood what we were trying to do. The results have been amazing and it’s the most rewarding thing I’ve ever been fortunate enough to do.”.